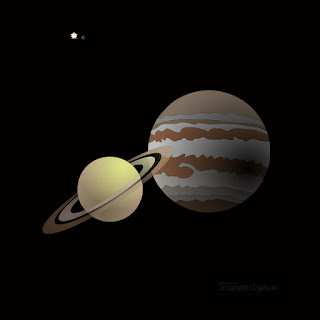 This artwork commemorates the Great Conjunction of Jupiter and Saturn that happened on 21 December 2020. These two giants of our solar system align about every 20 years, but this is a “Great Conjunction” because their alignment is so close, they will appear as a double planet. Such conjunctions are very bright and are often referred to as the “Christmas Star” because some believe this is the “star” that led the Wise Men to Jesus on the night Jesus was born. The last time such a close alignment happened, and was visible to Earthlings, was in 1226. As well, this conjunction occurs on the Winter Solstice in the Age of Aquarius; such a combination of staggering celestial events augurs well after a most tumultuous few years on Earth. In the artwork, the view is not seen as if from Earth, but from the back side of Jupiter and Saturn. In the distance, you can see the Sun, small because it is faraway; and next to the Sun, in its close orbit, you can see the Earth (which is scaled larger than it would actually be if you were viewing it from behind Saturn, but I wanted it to be visible). The celestial world is full of wonder and beauty—it is the home where we live and is worth watching. Like Jack Horkheimer used to say, “Keep looking up!” Ever since Jack Horkheimer’s death in 2010, I can’t help but sense that he is now “looking down”, maybe from somewhere behind Saturn.

You can purchase a print of this artwork at FineArtAmerica. 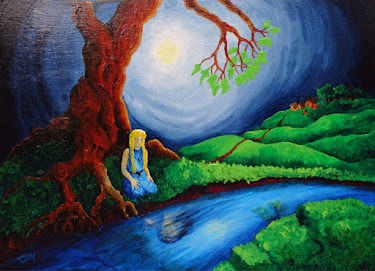 Story Art: Woman in the Water

Woman in the Water by Teresamarie Yawn Acrylic on Birch Wood A young Celtic girl left the safety of her home and slipped into the night. She walked the long path to a great oak tree overhanging a stream. The moon is full and rising towards its zenith, casting a glow across the land and causing the leaves of the tree to shine. The girl's hair is blond and set in two braids. She kneels in the grass in front of the tree, her hands on her thighs, and she stares into the fast-moving stream. At first, she sees her reflection, but then, the shimmering water shifts and a new face appears. The girl is astonished--her eyes go wide, her mouth forms an "oh", and her muscles tighten. The face in the water is a beautiful yet frightening woman, with long black hair flowing with the stream. The woman in the water appears ageless, as if she has lived for an eternity; she seems capable of great violence but also of great love; of destruction and creation; of peace and war. Of life, and dea 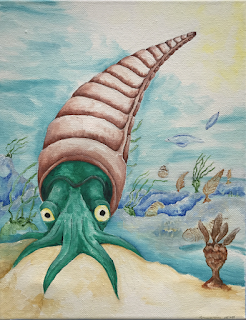 A nautiloid looks boldly through the mists of time, giving the viewer a glimpse into its world. This is one of the earliest nautiloids to evolve on Earth; it is only a few mm tall and has a primitive shell, two large eyes, and many tentacles. It likes to roam the seabed, searching for algae and bacteria to prey upon; or float through the ocean, collecting and consuming life suspended in the water. At this time, some 500 million years ago when the Cambrian Period was transitioning into the Ordivician, life was blossoming in the warm, shallow seas that stretched along continental coasts. Look and you will see a few of the inhabitants that shared this sea with our nautiloid friend. By the dappled sunlight, two primitive fishes, of the genus Haikouichthus , swim. In the foreground, sharing the sandy hillock upon which the nautiloid sits, is Eumorphocystis , an echinoderm; it is not a free-living animal, but rather lives stalked to the sea floor; it, too, feeds on life suspended in the wa